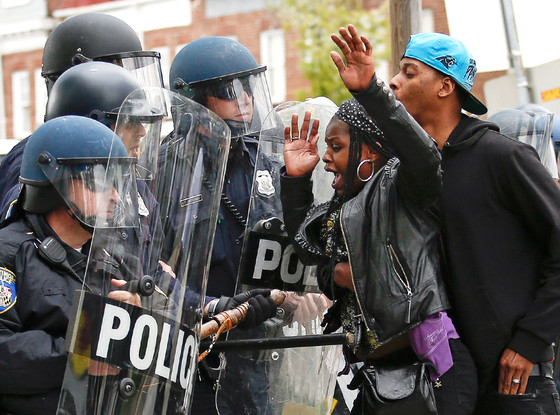 There comes a time when even the most ardent supporter of law enforcement has to stop, take a check on reality, and admit that there is no longer distinction between law breaker and law enforcer. Both claim to be in the right. And both claim to be protecting citizens. It is my view that point has been reached. Not just in Baltimore. But in America as a whole.

I have proposed what might well be part of a solution with the concept (really not that original) of citizen design of policing.

I have had communication with Aldermen and certain activists in my current home town (of ten years), Carrboro, NC, about gently exploring that concept in my home town. Not because it is a hotbed of confrontation between citizen and police, but precisely because it is not.

I had hoped that there would be time to allow us to move that concept forward on a step by step basis. That time is no longer available. The streets of our nation are burning now. It is no good saying, but the problem is not here, let’s move slowly. The problem may not be here. Now. But if we do not become active, and aggressively active, in finding a solution now, then we have become a part of the problem, too.

The next step was for the Carrboro Board of Aldermen to host a second policing community forum with Carrboro Chief of Police in early June. I will be writing this week to the Board to ask them to confirm the forum is being held, to ask that they advertise it widely, and specifically to request that we put the concept of citizen design of policing prominently on the agenda.

We need to explore the concept with vigor, iron out the wrinkles, and create a working model as soon as is possible, so that the nation may see an option in action that prevents any more Fergusons, Clevelands or Baltimores. Now. There is no more time to waste.

And so that I am absolutely clear, I am challenging the Carrboro Board of Aldermen and its Chief of Police to act with the same sense of urgency as I am now communicating, or offer the fullest explanation as to why they will not. And I am calling on any and all concerned citizens to attend the forum when it is held, so that we can all do our civic duty, not just by our home town, but by our nation.

I welcome any alternative proposals. Here. Now. Elsewhere. At the community forum. Wherever. But if it is not an alternative which has a realistic chance of preventing violence between police and citizen, then it is not a realistic alternative. What I will not accept quietly is silence or obstruction. We need to play out part. And play it now.